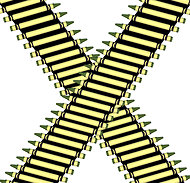 WHEN we don’t get the results we want in our military endeavors, we don’t blame the soldiers. We don’t say, “It’s these lazy soldiers and their bloated benefits plans! That’s why we haven’t done better in Afghanistan!” No, if the results aren’t there, we blame the planners. We blame the generals, the secretary of defense, the Joint Chiefs of Staff. No one contemplates blaming the men and women fighting every day in the trenches for little pay and scant recognition.
And yet in education we do just that. When we don’t like the way our students score on international standardized tests, we blame the teachers. When we don’t like the way particular schools perform, we blame the teachers and restrict their resources.
Compare this with our approach to our military: when results on the ground are not what we hoped, we think of ways to better support soldiers. We try to give them better tools, better weapons, better protection, better training. And when recruiting is down, we offer incentives.
We have a rare chance now, with many teachers near retirement, to prove we’re serious about education. The first step is to make the teaching profession more attractive to college graduates. This will take some doing.
At the moment, the average teacher’s pay is on par with that of a toll taker or bartender. Teachers make 14 percent less than professionals in other occupations that require similar levels of education. In real terms, teachers’ salaries have declined for 30 years. The average starting salary is $39,000; the average ending salary — after 25 years in the profession — is $67,000. This prices teachers out of home ownership in 32 metropolitan areas, and makes raising a family on one salary near impossible.
So how do teachers cope? Sixty-two percent work outside the classroom to make ends meet. For Erik Benner, an award-winning history teacher in Keller, Tex., money has been a constant struggle. He has two children, and for 15 years has been unable to support them on his salary. Every weekday, he goes directly from Trinity Springs Middle School to drive a forklift at Floor and Décor. He works until 11 every night, then gets up and starts all over again. Does this look like “A Plan,” either on the state or federal level?
We’ve been working with public school teachers for 10 years; every spring, we see many of the best teachers leave the profession. They’re mowed down by the long hours, low pay, the lack of support and respect.
Imagine a novice teacher, thrown into an urban school, told to teach five classes a day, with up to 40 students each. At the year’s end, if test scores haven’t risen enough, he or she is called a bad teacher. For college graduates who have other options, this kind of pressure, for such low pay, doesn’t make much sense. So every year 20 percent of teachers in urban districts quit. Nationwide, 46 percent of teachers quit before their fifth year. The turnover costs the United States $7.34 billion yearly. The effect within schools — especially those in urban communities where turnover is highest — is devastating.
But we can reverse course. In the next 10 years, over half of the nation’s nearly 3.2 million public school teachers will become eligible for retirement. Who will replace them? How do we attract and keep the best minds in the profession?
People talk about accountability, measurements, tenure, test scores and pay for performance. These questions are worthy of debate, but are secondary to recruiting and training teachers and treating them fairly. There is no silver bullet that will fix every last school in America, but until we solve the problem of teacher turnover, we don’t have a chance.
Can we do better? Can we generate “A Plan”? Of course.
The consulting firm McKinsey recently examined how we might attract and retain a talented teaching force. The study compared the treatment of teachers here and in the three countries that perform best on standardized tests: Finland, Singapore and South Korea.
Turns out these countries have an entirely different approach to the profession. First, the governments in these countries recruit top graduates to the profession. (We don’t.) In Finland and Singapore they pay for training. (We don’t.) In terms of purchasing power, South Korea pays teachers on average 250 percent of what we do.
And most of all, they trust their teachers. They are rightly seen as the solution, not the problem, and when improvement is needed, the school receives support and development, not punishment. Accordingly, turnover in these countries is startlingly low: In South Korea, it’s 1 percent per year. In Finland, it’s 2 percent. In Singapore, 3 percent.
McKinsey polled 900 top-tier American college students and found that 68 percent would consider teaching if salaries started at $65,000 and rose to a minimum of $150,000. Could we do this? If we’re committed to “winning the future,” we should. If any administration is capable of tackling this, it’s the current one. President Obama and Education Secretary Arne Duncan understand the centrality of teachers and have said that improving our education system begins and ends with great teachers. But world-class education costs money.
For those who say, “How do we pay for this?” — well, how are we paying for three concurrent wars? How did we pay for the interstate highway system? Or the bailout of the savings and loans in 1989 and that of the investment banks in 2008? How did we pay for the equally ambitious project of sending Americans to the moon? We had the vision and we had the will and we found a way.